On 23rd April 2014 Guildhall Library celebrated what would have been Shakespeare’s 450th Birthday with ‘A Complete Reading of Shakespeare’s Sonnets’. The 154 sonnets were read by a team of 60 enthusiastic volunteers. Despite there being no practice run or rehearsal for the reading, the audience were treated to a wonderful and varied reading. 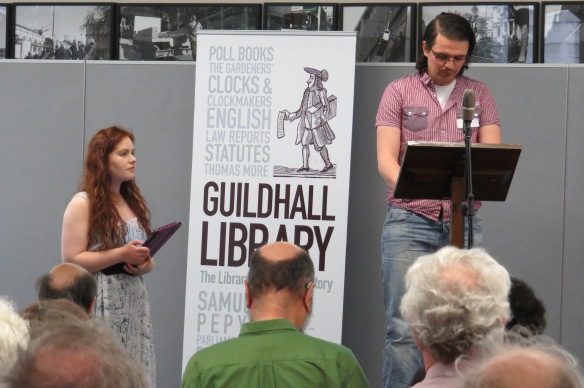 Hearing all the sonnets read together was something of a revelation, at least to this member of the audience, as it was clear that the tone and emphasis changed quite radically, so that the final poems seemed very far removed from the earlier, perhaps more lyrical, sonnets.

Dr Roy Booth, Senior Lecturer in Renaissance Literature at Royal Holloway, University of London, launched the event with an engaging and entertaining introduction to the poems and the sonnets were then read by volunteers including Guildhall Library customers, City of London Guides, Keats House Poetry Ambassadors and City of London staff.

In addition we were joined by some special guests including Damian Lewis, the Emmy and Golden Globe-winning Homeland actor. Damian Lewis, who graduated from Guildhall School of Music & Drama in 1993, commenced the sonnet reading with the first five sonnets. He had previously prepared for this role by performing with the Royal Shakespeare Company and starring in the BBC’s updated ‘Shakespeare Re-Told’ version of Much ado about nothing! 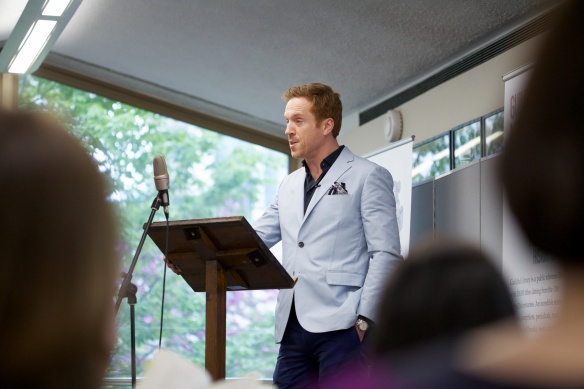 Damian Lewis’s participation was filmed for the City of London’s YouTube Channel, and you can watch the video online. The appearance of a Hollywood star as a sonnet reader received high profile press coverage, with the event reported by ITV News at Ten and ITV News Online, BBC London TV, the Daily Mail, City A.M. and The Daily Telegraph. 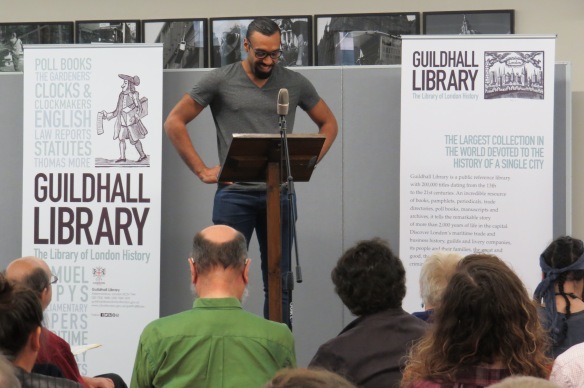 Despite the complicated logistics of coordinating 60 volunteers (not to mention the media who accompanied our first sonnet reader!), the event ran more smoothly than we could have even hoped. We were grateful to the two sonnet readers who stepped in on the day before the event to cover for two poorly readers who were forced to pull-out. On the day, we had only one no-show, and the three sonnets that became available were quickly snapped up by other readers!

The atmosphere at the event was enhanced by the sonnets being read alongside our ‘Shakespeare in Print’ exhibition with the First Folio, 1623, contemporary writers’ quartos, and later editions of Shakespeare’s plays and poetry providing a fitting backdrop to the event.

We were delighted to host such a fantastic, enjoyable and unique event that allowed so many individuals to get involved with celebrating the Bard’s Birthday in style.

Take a look at our photos from the Complete Reading of Shakespeare’s Sonnets on Flickr.