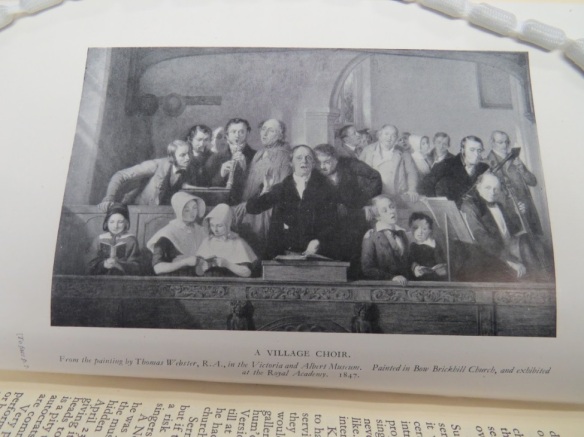 Much loved Christmas carols will be sung across the City in special services this month and many of us will go along and sing words and tunes which have been a part of our enjoyment of the season since childhood.

A carol was originally a joyful song which could be sung at any time of year, but the word carol gradually became associated with the songs and hymns sung during Advent and Christmas time.

It has not always been ‘respectable’ to sing Christmas carols in church let alone sing wassails. Indeed they were often seen as worldly and irreverent and not fit for the service of God.  In these days of broader tastes and a more relaxed approach to what can be sung in church, perhaps one would not be at all surprised if the church choir burst into a chorus of Roy Wood’s “I Wish it Could be Christmas Every Day” or even the ubiquitous Slade, both of which have a celebratory tone.

The survival and success of music for Christmas in churches has had a chequered and remarkable history. It came close to demise during the Civil War period following a Parliamentary order for the demolition of church organs on the 9th May 1644.  The Parliamentarians are unlikely to have been objecting to music itself, just its use in church which was seen as frivolous and irreverent.  After the Restoration the old music resurfaced in churches and in some places it had never been submerged. This revival included the singing of unaccompanied psalms and the formation of church bands and quires (choirs).  Old tunes were celebrated once again and new tunes were composed.  Organs gradually returned to churches too but many rural and city parishes couldn’t afford them so the church band and quire took its place. However, toward the middle of the nineteenth century, the influence of the Oxford Movement made the organ the standard musical accompaniment once again, together with robed choirs who usually sat in the chancel.  Guildhall Library has books in its collections which can tell us more about this fascinating period.

One of the musical traditions which was all but lost during the late nineteenth century was revived toward the end of the twentieth – that of West Gallery Music.  It had been popular from the early 1700s to the mid-nineteenth century beginning with the singing of metrical psalms but later augmented with anthems and carols.  This music was usually performed in the West Gallery of country churches – hence the name.  The singers were usually male with each “voice” or part being led by an instrumentalist. 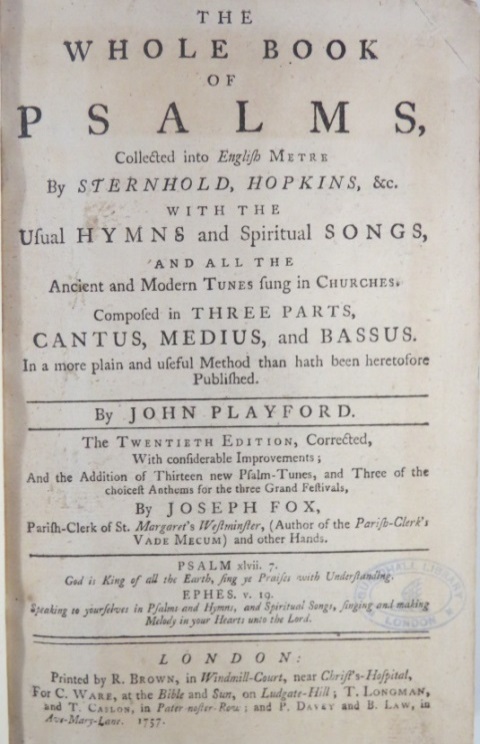 A pre-West Gallery strand of music making in church was reflected in John Playford’s “Whole Book of Psalms” published in 1677 (Guildhall Library holds an 18th century copy).  Collectors like Playford were important in the re-discovery and dissemination of pre-Commonwealth tunes.  Playford records a tune called “Winchester” for Psalm 107 “Give Thanks Unto the Lord”. 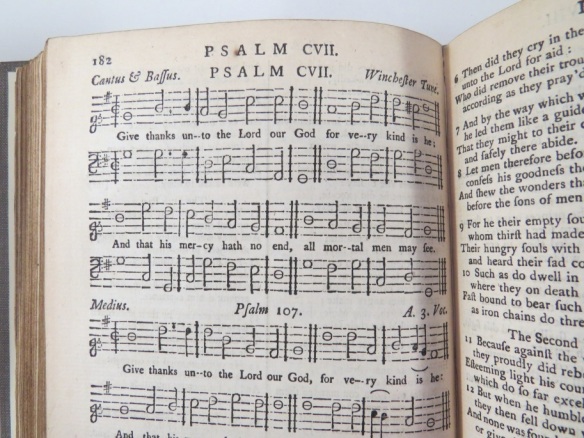 The melody will be more familiar to us as “While Shepherds Watched their Flocks by Night,” the words to which are thought to have been written by Nahum Tate (1652 –1715) of Tate & Brady Psalms.  This may suggest that the association of Tate’s words with “Winchester” was quite new in Playford’s time.  During the later West Gallery period, Winchester was just one of many tunes for this favourite carol.  Collectors of these tunes have apparently identified at least two hundred tunes for “While Shepherds Watched,” including Lyngham (associated with Cornwall), Otford, and Cranbrook – written in Kent.  The latter is now better known as “On Ilkla Moor bar tat” why not try it…”and glory shone around, and glory shone around, and glo-ry shone around…”

The West Gallery tunes were sung in Anglican and Non-Conformist churches in country villages and towns.  As we have seen, different parishes and congregations had their own traditions and the words and tunes local usage.  Some churches preferred to sing metrical psalms only, such as “All People that on Earth do Dwell” (Psalm 100), whilst others had a broader repertoire.  In church the choirs often sang words based on biblical texts or the Book of Common Prayer, but they also learned Christmas carols to be sung not in church, but in their homes and for ‘going the rounds’ on Christmas night.

Some post Commonwealth parishes supported the work of the singers and musicians by employing singing teachers or purchasing musical instruments to accompany the singing when players were too poor to afford their own.  Players and singers were sometimes paid money or supplied with food and drink.   The music was handed down through families, many of whom created their own music manuscripts.  These local players often played for secular occasions too.

The rousing harmonies of West Gallery tunes were not unanimously welcomed, some parishes felt that traditional psalm tunes were better suited to the solemnity of a church service. There remained a suspicion of a tradition in which ordinary villagers led the service and that their singing and playing was not confined to or controlled by the church.  Others genuinely felt that it was better for the whole congregation to sing together rather than listen to a quire and musicians.  The church bands and choirs were gradually replaced by organists.

Guildhall Library’s collections offer an insight into the history of Christmas music sacred and secular.  In his preface to “Some Ancient Christmas Carols” (1823) Davies Gilbert looks back at a dying tradition…

“shadows of these customs were, till very lately, preserved in the Protestant West of England.  The day of Christmas Eve was passed in an ordinary manner; but at seven or eight o’clock in the evening cakes were drawn hot from the oven; cyder or beer exhilarated the spirits in every house; and the singing of Carols was continued late into the night.  On Christmas Day these Carols took the place of Psalms in all the Churches, especially at afternoon service, the whole Congregation joining; and at the end it was usual for the Parish Clerk to declare, in a loud voice, his wishes for a merry Christmas and a happy new year to all the Parishioners.” (Preface iv)

My own introduction to the joyous sound of West Gallery Music came through the work of Thomas Hardy whose father played in the West Gallery of the church at Stinsford, a village near Dorchester in West Dorset.  The County Museum houses the Hardy family’s music books with religious tunes at one end and secular ones at the other.  Hardy’s family memories inspired  some of his poems but above all his novel “Under the Greenwood Tree” which he subtitled “The Mellstock Quire, a Rural Painting of the Dutch school” (Guildhall Library reference B:H 272).  In that novel Hardy gives a fictional account of the quire ‘going the rounds’ on Christmas Eve and leading the singing in church on Christmas morning.  There is a poignant sense of loss at its eventual demise in favour of a single musician – the church organist.

When Davies Gilbert (1767-1839) published his collection of “Some Ancient Christmas Carols: with the Tunes to which they were Formerly Sung in the West of England. Together with Two Ancient Ballads, a Dialogue, &c” he was offering these songs to the reading public at a time when they were increasingly undervalued.
(Guildhall reference S 728:28 )

And the better known “Christians Awake”

Gilbert also records the carol “A Virgin Most Pure” which is sometimes called “A Virgin Unspotted” (see Sandy’s “Christmastide: Its History, Festivities and Carols”) and gives the tune.  Sandys records it as a West Country tune but it has been popular in several English counties.    It seems that this carol had a secular origin.  Broadwood & Fuller Maitland in their “English Country Songs” (1893) tell us that the tune used was one called “Admiral Benbow” sung at Marden, near Hereford.  Sandys also records the words to “Remember Adam’s Fall” in his “Christmastide” which is sung by the Mellstock Quire in Hardy’s “Under the Greenwood Tree”.

William Sandys (1792-1874) gave the words of forty two Christmas songs and the music for twelve. He too was saddened that carol singing was dying out. He recorded “A Virgin Most Pure”, “Remember Adam’s Fall” as well as a carol which possibly dates back to the fourteenth century entitled “Joseph was an Old Man” also known as the “Cherry Tree Carol”

“This morning I found John Cozens at work on the lawn covering down one of the old flower beds, the one near the Deodar, between it and the limes. He fulfilled his promise of reciting to me the old Christmas Carol which the Wassailers and he as chief singer used to sing with the Wassailing song at Christmas. John leaned on his spade and I took this carol down word for word from his mouth.

Joseph was an old man,
An old man was he,
When first he courted Mary
What a virgin was she…” 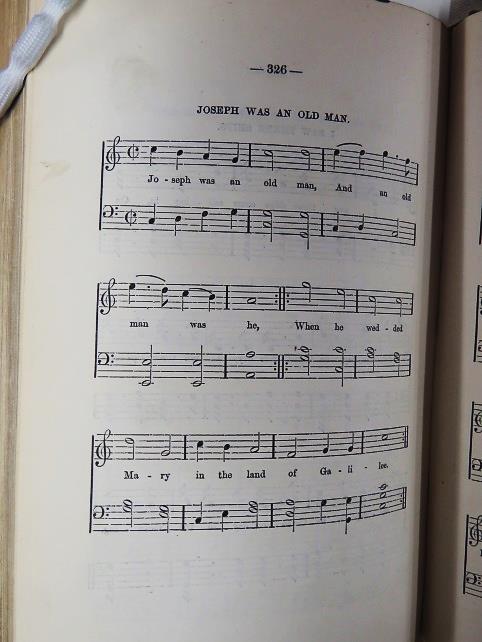 Thankfully West Gallery tunes are now easier for a modern day audience to experience owing to the dedication of singers, musicians and scholars who have performed and recorded them in recent years. In the Sheffield area the music has survived by moving it to the pub and during December people still sing the old carols with gusto over a pint.

In London we are fortunate to have the London West Gallery Quire so we do not have to head for the West Country or Yorkshire to hear these wonderful tunes.  There is a West Gallery Music Association http://www.wgma.org.uk/ where you can find articles about the music and details of concerts.  So let’s not be limited in our choice of Christmas music this year and celebrate our long and varied tradition of sacred and secular carols.

The newsletter of the Friends of City Churches available in the library also lists carol services and concerts in the City.

Find out more about secular and sacred Christmas music in Guildhall Library’s collections:

Christmastide : its History, Festivities, and Carols [1852]

Festive Songs, Principally of the Sixteenth and Seventeenth Centuries with an Introduction by William Sandys (1848)

Available via Jstor in the library

The Old Church Gallery Minstrels: An Account of the Church Bands and Singers in England from about 1660 to 1860

Some Ancient Christmas Carols : with the Tunes to which they were Formerly Sung in the West of England. Together with two Ancient Ballads, a Dialogue, &c (1823)

Under the Greenwood Tree