As part of the Londinium celebrations taking place across the City of London the Guildhall Library’s new exhibition looks at the Discovery of Roman London. It was only in the early 19th century that Londoners with an interest in history realised that large parts of Roman London could have survived under the modern streets of their City and that it might be possible to actively search for the archaeological evidence. This exhibition looks at the early pioneers of Roman London archaeology who often acquired objects straight from building sites in the City. The exhibition contains items from the Guildhall Library’s collections and archaeological artefacts from the Museum of London’s collections.

The exhibition focuses on several notable businessmen who became experts in the field of Roman London archaeology. Charles Roach Smith (1806-1890) ran a chemist’s shop in Lothbury. He was one of the founders of the British Archaeological Association. He became interested in the history of London because of the excavations taking place around his shop in the City of London. As the City underwent a period of vast building and renovation its previous layers were uncovered. Charles Roach Smith collected artefacts from the building sites to further his research on the Roman city. He wrote extensively about his discoveries and became one of the leading experts on Roman London of the 19th century. These artefacts made up his own private museum which was featured in several publications of the time. He would host private tours to those interested. When he moved out of London he sold his large collection to the British Museum where many of the objects are still on display today. Featured in the exhibition display cabinets are copies of Roach Smith’s Illustrations of Roman London alongside Roman artefacts from the Museum of London. 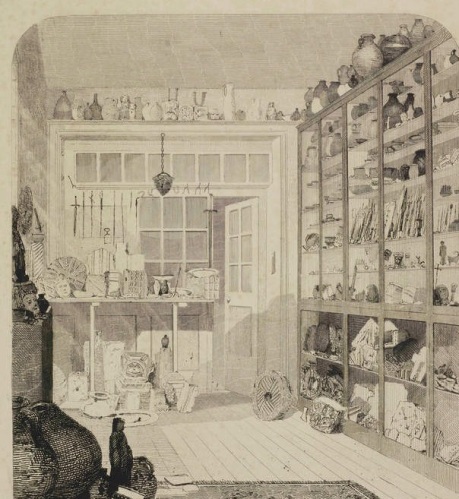 John Walker Baily (1809-1873) was senior partner in a successful company of Ironmongers. The family had close ties with the Guildhall as when his father ran the company they had provided the iron gates for the Basinghall Street entrance. Featured in the exhibition is Baily’s beautifully illustrated manuscript catalogue of the 400 objects which made up his collection of Roman and Medieval antiquities. When Baily died they became part of the collections of the Guildhall Museum. Today the antiquities are part of the collections of the Museum of London and the catalogue remains at Guildhall Library as part of the records of the Worshipful Company of Ironmongers. 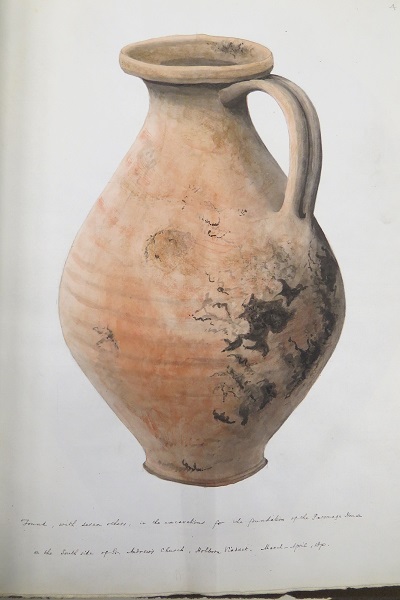 At the same time that these collectors were acquiring their artefacts the City Corporation was becoming increasingly interested in displaying artefacts relating to the history of London.  In 1826 the Guildhall Museum was established to provide, “A suitable place for the reception of such Antiquities as relate to the City of London and Suburbs”.  However, the museum didn’t open its doors to the public until decades later when appropriate museum space and collections had been acquired.  The exhibition features a photo-wall display of images from the Guildhall Museum from it’s opening in 1873 through to its closure in 1976 when it merged with the London Museum to become the Museum of London.  Artefacts from the Guildhall Museum can still be seen today in the Museum of London’s galleries. 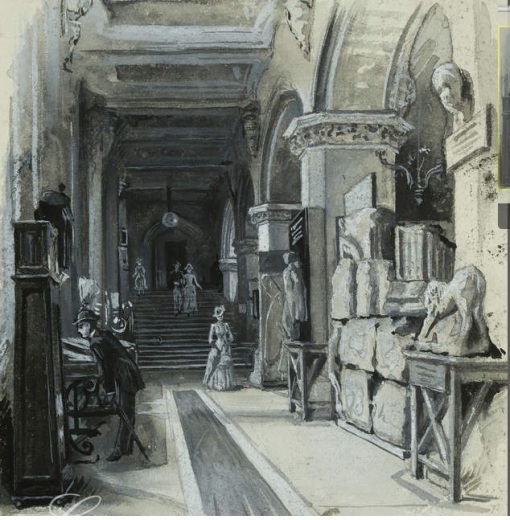 Many events associated with the exhibition have already sold out but there are still tickets available for the following:

Later Roman London and the End of Roman Britain

London was the capital city of Britannia. It governed a territory which in the South and the East was a fully functioning part of the Roman Empire, but to the North and West was a militarised border region. This far flung territory of Rome changed over time, and eventually slipped out of the Imperial control. In this talk Simon Elliott tells the tale of Roman London from the ‘Crisis of the 3rd Century’ until its final demise in the early 5th century.

In this lecture Simon Elliott will narrate a day in the life of a wide variety of Roman Londoners in the mid 2nd century AD when the city was at its height during the Roman occupation. He will lift the lid on every aspect of day to day living in the city during the Roman period, from every perspective in society, showing how some things were very similar to our experiences today, but some things very different.

Empire State: How the Roman Military Built an Empire

The armed forces of Rome are regarded as some of the finest military formations ever to engage in warfare. Less well known however is their use by the State for non-military activities. In his new book ‘Empire State: How the Roman Military Built an Empire’, Simon Elliott considers this for the first time, showing how the military were utilised in a wide variety of civilian roles. These included helping administer and police the Empire, being the main resource used in construction and engineering projects, running industry such as metalla mining and quarrying, and participating in agricultural activity.